You are here: Home / Blog / What you may not know about divorce and debt

The financial aspects of a divorce case involve multiple, interrelated components. All eyes are typically on the couple’s assets and how to equitably divide them in a settlement. Yet, in my view, one area of a couple’s financial landscape that warrants equally close consideration during divorce is the couple’s debt.

Get a credit report on yourself and your spouse

I recommend ordering a credit report for each spouse to assure that all outstanding debts are included in the settlement discussions. Even if you are still just considering divorce or are early in the process, order your own copy of your credit reports – yours and your spouse’s – to review and dissect. You can get them for free from annualcreditreport.com.

These reports generally reveal most outstanding community debts associated with each party. They may also hold surprises that require a closer look. For example, a credit report may indicate that one spouse has outstanding debt the other spouse has no idea about. There could also be errors in a credit report. In this case, order additional reports from other credit bureaus to check for discrepancies, then contact the provider for further information.

Once one of the spouse’s files for divorce, it’s generally a good idea to limit the amount of debt each spouse adds to the “community” during the divorce process. Until the couple is divorced, any debts incurred are considered “community” responsibility. It is also wise to maintain the status quo in terms of making timely, monthly payments to creditors during the divorce process. Both parties should strive to protect individual credit ratings during divorce.  Sometimes, agreements are legally set in place with Temporary Orders (drafted by your attorney, signed by all parties and filed with the court). In a cooperative divorce, the couple makes these decisions informally, sometimes working with a divorce financial analyst. These temporary arrangements should also outline who pays for what until the divorce is final. Both spouses should maintain good records for all the payments made during this time.

While it is a good idea not to run up credit card or other debt during this time, consider putting your divorce financial analyst’s or attorney’s fees on a credit card in order to protect cash reserves. It may also make sense to pay minimum payments on credit cards now for the same reason.

Who gets the family home?

Many married couples carry a mortgage in both names on the family home. This is usually a key consideration during a divorce. Should the home be sold and the proceeds split before the divorce? If there is equity in the home, can one spouse afford to keep the home as his or her part of the settlement?  She may have to forego important financial assets such as savings, stocks, bonds or mutual funds in order to offset the equity in the home.

Many people believe that a home must be refinanced to remove the other party’s name. However, an attorney can draft legal documents to handle a mortgage that isn’t refinanced. It’s called a “deed of trust to secure assumption.” This legal document is filed in county records and allows the spouse who isn’t staying in the home to secure another mortgage, since he or she has a lien against the home.

All of these questions will have to be considered and carefully analyzed before the details of a settlement are worked out. One unique approach to crafting a divorce settlement involves how the community debt and assets are divided between the two parties. It actually may make sense for one party to assume some or all of the debt in exchange for other marital assets, such as 401(k) savings. Typically, the higher earning spouse retains most of debt, but is rewarded with more of assets for doing so.

Another aspect of divorce debt to consider involves whether one or both spouses entered into the marriage with significant debt that was paid off over time using community funds. Assets brought into a marriage are considered separate property. Consequently, they remain separate at the time of divorce. In other words, they are not part of the division that occurs during settlement. Debts, if significant enough, are viewed the same way. They come into the marriage as separate debt owed by the responsible spouse. So, if the debt is paid off using community funds, the other spouse should get “credit” or an asset of equal value for helping to pay down half or part of that debt.

Crafting an equitable divorce settlement often requires creative thinking and an intimate knowledge of divorce law. I’ve found that how couples approach the community debt in a divorce can offer them a win-win solution that is also practical from big picture perspective. If you have questions about the financial side of divorce, call me at 832-858-0099.

This article is designed to provide readers with a general overview of the issues discussed and is not a substitute for individual legal or financial representation. 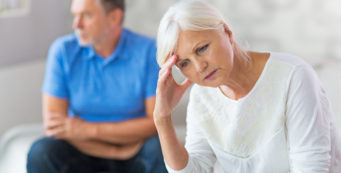 Decisions about filing for Social Security benefits will affect you financially for the rest of your life. And if you have gotten divorced in the past, you may qualify to receive Social Security on … END_OF_DOCUMENT_TOKEN_TO_BE_REPLACED